1. Hydrogen can be prepared in the laboratory by reacting hydrochloric acid with Zinc metal.
How do you test for the gas? (2marks)

(a) State any two factors that can make the reaction
go faster. ,. (2marks)

(b) In a reaction between zinc and excess.

2. Alkenes belong to a homologous series of unsaturated hydrocarbons.
(a) Give the names and structural formulae of the first two members of the series.

(i) Name the polymer

3. The elements X, Y, and Z belong to the same group of the periodic table. Study the table below which shows the reaction of each element dissolved in Carbon tetrachloride with aqueous Potassium chloride, potassium bromide and potassium iodide solutions.

(a) Which one of the elements is
(i) the most reactive?

(e) What is the physical state of Z at room temperature? (1 marks) 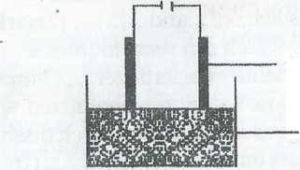 In the experimental set up above, a current of 0.5A was passed through copper (II)sulphate solution between copper electrodes for 1 hour 30 minutes.

(a) Write equations for the reactions taking place at
the electrodes: At cathode
At anode (2marks)
b) Calculate the quantity of electricity in Faradays use (2marks)
c) Calculate the mass of copper that will be
deposited (2marks)

d) If graphite elects odes have been used instead, identify the product that would be obtained at:
(i) Cathode:
(ii) anode (2 marks)

e) Still using graphite electrodes instead of copper,
what two observations would be made? (2marks)

(a) a compound that should be added into water but not water into it. (1 mark)

(b) A compound that is efflorescent (1 mark)

-(d) Two compounds that can react to form a
compound from this list. …….and (2marks)

(a) Using just the chemical symbols of the elements,
arrange them in the order in which they are found in the electrochemical series (2 marks)

(b) Which one of these elements is always found free
in nature? (l mark)

(c) A piece of Magnesium ribbon is placed in copper (H) nitrate solution,

(d)Iron reacts with both steam and dilute
hydrochloric acid. Write an equation for the reaction

(i) iron and steam..
(ii)Iron and hydrochloric acid (2marks)

(e) Which one of these elements reacts vigorously with
cold water? Write an equation for the reaction (2marks)

Answer any TWO questions in this section. All questions carry equal marks. Where appropriate, equations and diagrams should be given to clarify your answer. Write your answer to the lined s which follow this section.
Useful data will be found on the back cover

7. (a) Describe the process for the manufacture of soap and detergents.
(b) State the advantages detergents have over soap (25marks)

8. Describe an experiment to show how the heat of
Combustion of ethanol can be determined, indicating all precautions to be taken (25marks)

9. Using suitable examples in each case distinguish dearly between the following terms as used in chemistry.
(a) Isotropy and allotropy
(b) Condensation polymerization and addition polymerization
(c) Thermal decomposition and thermal dissociation
(d) Neutralization and esterification.
(e) Dehydration and hydrogenation………..(25marks)