State Hess’s Law
(ii) Use symbols to indicate the species present at A, B, and C on the diagram above.
(iii) Calculate the molar enthalpy of solution of sodium chloride.
(iv) Predict, giving reasons, whether the value for the enthalpy of hydration of sodium bromide will .
be the same, less or greater than the value for sodium chloride.
(v) Use the data in the table below to calculate the molar enthalpy change for the reaction
NH3(g) +3F2(g—> 3HF(g) + NF3(g)

2. (a) The following equation is in the state of dynamic chemical equilibrium
PCl5(g) —> PCl3(g) + Cl2(g) . DH= +ve
(i) Explain the term dynamic equilibrium
(ii) Give two conditions needed for a system to attain a state of chemical equilibrium.
(iii) What will be the effect on
A: The position of the above equilibrium if the total pressure on the system was increased
at constant temperature?
B: The numerical value of the equilibrium constant KCl of the reaction if the temperature of
the system is increased?
(iv) Write the equilibrium constant expression (Kc) giving units for the reaction above. (8 marks)
(b) In an experiment, 15.5g of PCI5 were allowed to dissociate in a 250cm3 flask at 25°C. At
equilibrium, the flask was analysed and found to contain 0.25moles of chlorine gas. Calculate
(i) The concentration of PCI5 in the flask
(ii) The value of equilibrium constant Kc (3 marks)
(c) (i) State Raouit’s Law.
(ii) A mixture of methylbenzene and benzene is an ideal solution. Explain why the mixture constitutes
an ideal solution.

Use the diagram below to sketch a well labeled graph to show the variation of vapour pressure
against composition for the mixture in C(ii) above.

(iv) Suggest a practical technique by which a mixture of benzene and methylbenzene could be
separated into its components. (7 marks)
(d) (i) Give an example of a solution which deviates positively from Raouit’s Law
(ii) Explain why this solution exhibits a positive deviation from Raouit’s Law. (2 marks)
3 The question is on chemical kinetics and bonding.
(a) What is meant by
(i) Activated complex of a reaction?
(ii) Molecularity of a reaction? (2 marks)
(b) What would be the effect on the rate constant if the temperature
(i) the collision frequency if the concentration of a reactant is increased?

2 (a) The following table shows’ the first ionization energies of the elements in Period, Na to Ar.

(iv) Explain why the first ionization energy of aluminium is lower than that of magnesium.
(7 marks)
(b) (i) State and explain the trends in atomic radius across the period, Na-Ar
(ii)Write the symbols of two isoelectronic ions of elements in the Period, Na-Ar.
(ii) Suggest stable oxidation states for aluminium and phosphorus

(c) (i) The elements in Groups I and II of the Periodic Table are called S-block elements. Explain the
term S- block elements.
(iii) How do the atomic radii of the elements vary down Groups I and II and between the two
groups?
(iii) Explain why:
A:The melting points of Group II elements are generally higher than those of Group I.
B:The hydroxides of Group I elements are more soluble than those of Group II. (5 marks)
(d) (ii)Write an equation in each case to show the effect of heat on the carbonates of lithium and
magnesium.
(ii) Why does lithium have a diagonal relationship with magnesium in its chemical properties?
(3 marks)
5(a) The halogens are found in Group7(17) of the Periodic Table.
(i) Give the names and the physical states of the halogens.
(ii) The haloacids of chlorine are:
A         B              C          D
HOCI HCI02 HOCIO3 HCIO4
Give the oxidation numbers of chlorine in A and C
(iii) Give the equation for the reaction of potassium iodate (KIO3) with potassium iodide in acid
solution.
(iv) In the space below, sketch the trend of u d strength of Imoldnr3 of acid HX(aq) and give an
explanation.

(b) (i)Give compounds Of sulphur which are used in the laboratory for volumetric analysis and the
corresponding equation for any one of them.
(ii) In the industrial preparation of sulphuric acid the following reaction occurs.
2S02(g) + 02(s) + 2S03(g) DH=-197KJmol-1

Give three ways by which the yield of S03(g) can be increased. (6 marks)
(c)ln the table below, give a named nitrogen compound used in each of the following: Nutrition,
Agriculture and industry..

This question is on d-block elements and the Group IV elements (C-Pb)
(a) (i) Differentiate between a transition metal and a d-block element.
(ii) Name two d-block elements which are not transition metals.
(iii) List two typical properties of transition metals. (4 marks)
(b) (i) During the reaction of a transition metal ion, there could be a colour change. Give three reasons
why there may be a change in colour.
(ii) For each of the observations described below, state which change or changes you have given
above is responsible for the change in colour
A: A pale blue aqueous solution of copper(ll) sulphate turns deep blue when added to an excess
aqueous ammonia.
B: A pink aqueous solution of cobalt(ll) chloride turns blue when excess of concentrated
hydrochloric acid is added. (5 marks)
(c) (i)What are chelating ligands?
(ii) Give an example each, of complex ions of copper and chromium containing chelating ligands.
(iii) Complexes undergo displacement .-reactions. Study the flow diagram below. Give the names or
formulae of the substances represented by the letters P, Q, R, S, T and U. 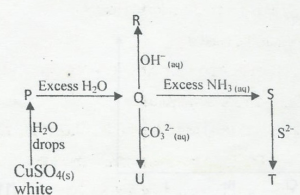 (d) From the compounds of Group IV elements (C-Pb), choose an appropriate example for each of the
following:
(i) A strongly reducing oxide
(ii) A giant covalent oxide
(iii) A strongly reducing chloride
(iv) A covalent chloride which is NOT hydrolysed by water. (4 marks)
(e) Write a balanced equation for the reaction of lead dioxide (Pb02) with:
(i) Abase
(ii) An acid (2 marks)

SECTION C : ORGANIC CHEMISTRY
7 A compound X of molecular mass 103 contains carbon, hydrogen, nitrogen and oxygen only. On
analysis it is found to contain 46.6% carbon, 8.74% hydrogen, 13.6%, nitrogen and 31.1% oxygen.
(a) Calculate: (i) The empirical formula of X (ii) The molecular formula of X (2 marks)
(b) How could the presence of nitrogen in the compound be identified? Give reagents and expected
results only. (3 marks) •
(c) The compound A has both the amino and a carboxylic acid -functional group and is optically
active.
(i) What is a functional group?
(ii) Write the structure of the carboxylic functional group.
(iii) Propose the structure of X. (3 marks)
(d) Draw a spread out structure of X and put an asterisk on the asymmetric carbon atom.(lmark)
(e) Give reagents and observations of a simple chemical test to identify the presence of the amino
group in a compound. (3 marks)
Ethanoyl chloride (CH3COCI) reacts with benzene according to the equation below to give
ethanone (acetophenone).

(i) Identify the reagent Y and give the condition for the reaction.
(ii) Explain why the reagent must be used dry.
(iii) What substance(s) would be obtained when phenylethanone (acetophenone) reacts with
A:NaOH/I2 B:2,4-dinitrophenylhydrazine C :Hydrogen cyanide gas.
(iv) If 2g of ethanoyl chloride were used and 1,95g of phenylethanone obtained. Calculate: A:
The theoretical yield B: The percentage yield. (8marks)

(i) Identify the compounds A, B, C, D E by drawing their structures.
(ii) Identify the reagent X (for the conversion of A to B)
(iii) What physical change is observed when C is converted to E? What is the name given to
this type of reaction? t
(iv) Write a complete equation for the conversion of C to D.
(v) Name the compound E. (10 marks)
(b) (i) State Markownikoff s rule.
(ii) Give two conditions under which anti Markownikoff addition will the take place. (3marks)
(c) Compound A can be polymerized into a macromolecule
(i) Explain what you understand by the term polymerization.
(ii) Identify the type of polymerization in A. (2marks)
The molecule H2N(CH2)6NH2and H02C(CH2)4C02H polymerize.
(i) Give the structure of the polymer.
(ii) What type of bond is formed in the above process? (2 marks)
(e) Compound E exhibits isomerism: Draw the structures of the isomers of E and identify the type
of isomerism these illustrate. (3 marks)
9 (a) An organic molecule has the molecular formula C4H8
(i) Draw four (4) possible isomer’s of the molecule. A :B : C:D
(ii) Some of the isomers- will react with hydrogen gas. Choose one of them and write an
equation for the reaction fort the reaction. (5 marks)
(b) (i) Write out the structural formulae of four (4) alcohols that can be deduced from the
molecular formula C4H10O
(ii) List the alcohols in b(i) in order of increasing boiling points (least boiling point first) and explain.
(7 marks)
(c) Alkenes can be prepared by warming an alcohol at 180°C with concentrated sulphuric acid.
(i) W hat is the role of the concentrated sulphuric acid?
(ii) Write the mechanism of dehydration of propanol CH3CH2CH2OH.
(iii) Propanol can be oxidized to propanoic acid using potassium dichromate(V). What
condition is necessary for the oxidation to take place?
(iv) How could you know that propanol has been oxidized? (6 marks)
(d) (i)Write an equation for the combustion of propanol in excess oxygen.
(ii) Why is the reaction in d(i} above useful in the car industry,