The food moves along the esophagus by peristalsis. This is the rhythmic, involuntary contraction of the gut wall in a curvy manner, propelling its content along it.

The gut wall comprises of smooth (involuntary) muscles, some of which are arranged longitudinally while others are circular. 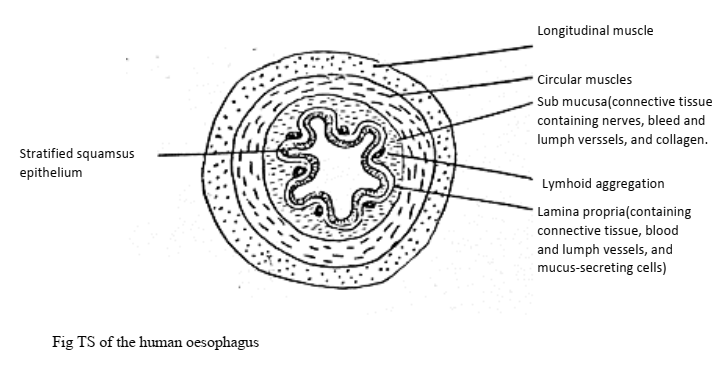 It is found in the left upper part of the abdominal cavity, just below the diaphragm. Its wall, unlike that of the other parts of the gut, comprises of three layers of smooth muscles, which all  help to churn(mix) the food in it. The muscles are: the outer longitudinal, the middle circular and the inner oblique(angular) muscles.

These secretions together constitute gastric juice, and are produced from gastric glands, many of which make up the stomach lining.

In addition to the secretion of HCL, the oxyntic cells also produce a module called the intrinsic gastric factor. It helps for the absorption of molecules of the vitamin B12 complex.

Gradually, the stomach empties its contents into the duodenum. The first part of the small intestines. This occurs through the pyloric sphincter.