Transpiration is the diffusion of water molecules in the form of vapor from the leaf to the atmosphere.

Transpiration may be t stomata (through stomata) or lenticular (through the lenticels) or cuticle (through the cuticle).

Soil water enters the plant through root hairs by osmosis and the water is carried up by the xylem to the leaf by root pressure and suction pressure.

The water is distributed to the spongy mesophyll and palisade mesophyll cells by diffusion through the xylem.

Some water evaporates in the intercellular air space of the spongy mesophyll cells of the leaf and they diffused through the stomata into the atmosphere.

Diagram to demonstrate transpiration in plant.: 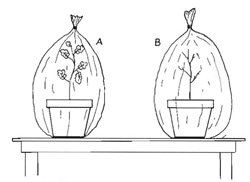 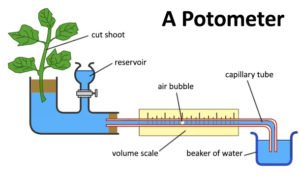 A potometer is made up of a bottle with wide mouth carrying cork with three holes. In these holes are fitted a dropping funnel with a tap. The stem of a freshly cut shoot, and a long bent capillary tube which is attached to a graduated scale.

While transpiration is going on the volume of water in the bottle will decrease and the water in the capillary tube is also taken up so that the air bubble will move backward.

1.7.2. CONDITIONS AFFECTING THE RATE OF TRANSPIRATION.

On a windy day, more water is swept off the surface of the leaf by the wind and this increases the transpiration rate more than on a day when the air is stilled

1.7.3. EXPERIMENT TO SHOW THAT VAPOR IS GIVEN OFF DURING TRANSPIRATION

Experiment to show that water vapor is given off during transpiration.

A potted plant, a transparent polythene band, a piece of string.

A potted plant is enclosed in a transparent band and the band is tied around based of the plant. The experiment is allowed for a few days.

After a few days, water vapor saturates the air in the bag and drops of water from inside the bag. The bag is removed and shaken and all the water is placed into the container and tested.

when water is poured over dry white anhydrous cu2so4 it becomes blue.

1.7.4. EXPERIMENT TO COMPARE THE TRANSPIRATION RATE OF TWO SURFACE OF A LEAF.

Experiment to compare the rate of transpiration of the two surfaces of a leaf.

Dry cobalt chloride paper in the presence of water will change from blue to pink. Two equal pieces of blue dry cobalt chloride paper are place, one on the upper surface of the leaf and one on the lower surface of the leaf and both are held in place by transparent sellotape. The experiment is allowed to stay in the sun for a few ours 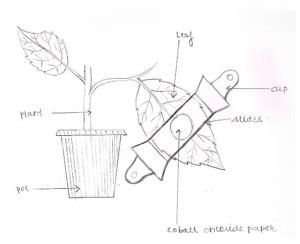 This shows that there is more transpiration on the lower surface.

click to head back to the table of contents