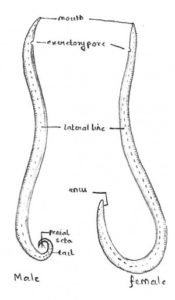 Most nematode are free living they are found everywhere in soil, hot springs etc. some however are parasitic affecting plants and other animal.

All nematodes have a long tube-shaped digestive track with a mouth and anus at a respective terminal. They effectively digest food in their guts. Free living round worms (nematodes) are carnivorous; they catch and eat other small animals including algae, fungi and pieces of decay organic matter. Many nematodes that live in the soil attach to the root hair of green plants sucking out plant juices. They cause tremendous damage to food crops all over the world.

The nematodes carry out this process through their body walls (like Platyhelminthes) e.g. have no internal transport system and so rely on simple diffusion since e.g. have a large surface area to volume ratio.

Nematodes have a simple nervous system there is a group of nerve cells at the head region called ganglia. This however is not a brain. They also have several types of sense organs to detect the presence of chemical. Several nerves extend from the ganglia to the various part of the body transmitting sensory information. This nerves equally control movement through the muscles in the body cells.

This worm reproduces sexually. Most of them have separate sexes but a few are hermaphrodite. Copulation occurs followed by fertilization in the body of the female. The parasitic nematodes usually have complex life cycle involving more than one host.

The Adult lives in the small intestine of humans. Other species closely related to ascaris also affect cattle, horses, pigs, chicken, dogs, goats etc. From the intestine, this adult reproduces eggs which leave the host body through feces. When food or water contaminated with such eggs is eaten by another host. From there, they enter the blood stream and are carried around the body. The tiny worms end up in the lungs. They break out into the tiny air passages, climb up into the throat and are then swallowed. Carried back into the intestine, they grow to maturity and the life cycle repeats itself.

These worms are responsible for some of the most painful and horrible diseases e.g.,

We shall look at each of these diseases and how to identify them.