Plate tectonics is the twisting, bending and breaking of the crust and its rocks as a result of plate movements

This theory describes the constant movement of the earth crust, according to this theory; the earth crust is made up of segment called PLATES which lies over the mantle. The theory of plate tectonics was derived from the proofs of continental drift in the 1960s

Plates are righted blocks that make up the earth crust which are constantly moving at a rate of 1 to 2 millimeter a year. These plates are divided into 2 namely; OCEANIC PLATE and CONTINENTAL PLATE

During plate motion some plates converge or move toward each other, others move away from each other or diverge while others by pass each other. The crustal zone where 2 plates make a contract is called a PLATE MARGIN OR PLATE BOUNDARY.

These are areas on the earth crust where 2 plates move away from each other. When 2 plates diverge, a new crust is formed thus the name constructive plates margin E.G The boundary btw the Nazca plate and the pacific plate.

They are formed where plates moving towards each others are colliding. It is called destructive bcs the crystal rocks are destroyed as 2 plates meet each other E.G The zone btw Nazca and South America plate landform here are deep sea trenches, fold mount.

This are zone  on the earth surface where 2 plates move parallel to each other without creating nor destroying crustal rocks E.G plate btw North America plate and the Pacific plate features here are Tear fault 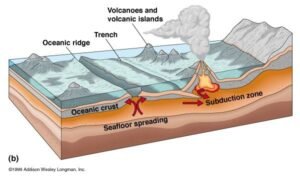