It is the 3rd planet of the solar system it is the only planet that support live.

WHY?? Bcs of the presence of free existing water

The total surface area  is estimated to be 510100779km². The diameter and the circumference of the earth are different at the poles and at the equator. It is larger at the equator and reduces toward the poles these dimension are as follows

The earth has a form that looks like on arrange. It is slightly flattened at the top and button ends. This ends are called POLES. The spherical shape of the earth is called GEOID 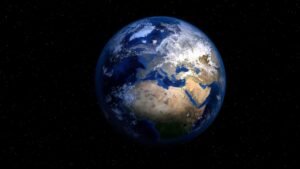