Theory of continental drift is a theory that describes the breaking and moving apart of continents according to Alfred Wegener. The German meteorologist, Alfred in 1912 published a theory (or idea) that all continents were once joined together in one large super continent or super large land mass which he called Pangaea surrounded by super large ocean known as Panthalassa. About 200 million years ago, Pangaea broke into two large continents or blocks: Laurasia (the northern block) and Gondwanaland (the southern part). These two blocks were separated by a narrow sea known as the sea of Tethys.

Later these two blocks somehow split up and the various continents, as we know them drifted apart. The process of splitting and movement of the “plate” of Pangaea is called Continental Drift

As the continents split and moved apart, water from the super ocean was filling the weathering gaps between the moving continents. This is how the oceans are behaved to have been formed. Presently the continents are still moving different directions. 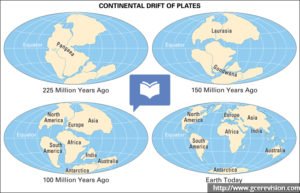 This has led to the conclusion that there must have existed a very wide land connection between south Africa, India, Australia and Antarctica for a long period of time.