The coelom is a fluid filled cavity found in the mesoderm of triploblastic organism in which organs like muscles, bones, heart etc. are suspended 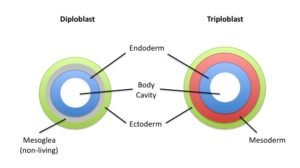 Fig: transverse section of a flatworm to show 3 cell layer

The endoderm is found on the outside, the endoderm on the inside, while the mesoderm is found between them. The mesoderm forms the bulk of the body because it gives rise to many structures like muscles, heart etc. Platyhelminthes have an organ level of organization (unlike the Cnidarians which have tissue level of organization) Each of their organs is specialize to carry out a particular function in the body. The have an enteron(gut) but lack a coelom like in the cnidarians simple diffusion is enough for substances to be transported through their bodies because they are relatively simple.

Fig: transverse section of a flatworm showing it organ level of organism

They are predominantly aquatic and belong to the class called turbellaria. Their outer body surface is ciliated. They use the cilia to beat through water thereby creating turbulence (the word from which their class name is derived) This helps them to move a common example of tubullarence is Planaria a fresh water Flatworm

Planaria is carnivorous feeding in on small worms, crustacean and the dead body of larger organism. Its posses’ glands on it ventral surface which secrete mucus which helps it to immobilize the food. Planaria has a pharynx (esophagus) which can be protruded through the mouth. By so doing it pours enzymes upon the food which get it partially digested. Next, it sucks up the food into the mouth and digestion is completed between a well develop digestive system planaria has no anus and so undigested food is expelled through the mouth.

Planaria has a well develop central nevour system (C.N.S) it has a brain in it head made up of dense cluster of nerve cells. A pair of nerve chords connect the brain with small nerves throughout the body. It sense organ include: A pair of simple eyes on the head and chemoreceptors on its lateral lobes. The chemoreceptors help it to locate food

Like most flatworms planaria is a hermaphrodite nevertheless, cross fertilization usually occurs. Also, planaria can also produce asexually by splitting into two then each fraction then regenerates the missing part.

Parasitism is a relationship between two organisms from which one of then called the parasite benefits while the other called the host suffers harm. Many platyhelminths are parasite most of them living within their host (endoparasite). Their host are animals from different species. Parasitic flatworms come from 2 classes; TREMATODA & CESTODA

The most common trematode is the liver fluke fasciola hepatica 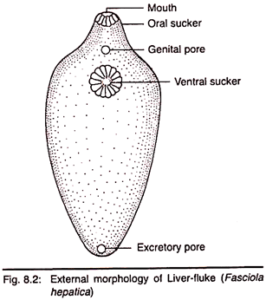 The adult lives in the bile duct of its primary host. This could be sheep, goat, cattle and occasionally humans. The adult lays egg which passes out in the host feces. Next the egg hatches into miracidia which are ciliated and so can swim. They penetrate the skin of an aquatic snail which is a secondary host. In the snail they develop into other larvae forms; Radiae and cercariae. The cercariae lives the snail body and found on vegetation. They become encysted (cyst) to avoid being destroyed by harsh conditions when the primary host comes feeding, it picks up the cercarium. This grow into adults and they establish in the Bile duct and the life cycle is taken over again which is repeated after metabolism.

Mature proglottids filled of fertilized eggs cut off from the tail end of the organism and are passed out with the host feces while on vegetation, the egg, called onchospheres can be eaten by the appropriate secondary host. In its intestine, the egg shell is digested producing a hexacanth (six-hooked larva) this larva penetrates the intestinal wall and enters blood vessels from where it is carried to the muscles of the secondary host either raw or poorly cooked, the bladder worm enters the intestine and grow to adult. This cut off mature proglottids and the life cycle grows about again.

Fig: schematic diagram of the life cycle of tapeworm

4.5 Adaptation of parasitic worms to their mode of life