Bacteria are unicellular microscopic organisms. They are a lot bigger than viruses 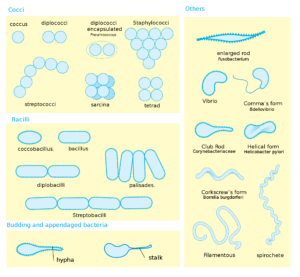 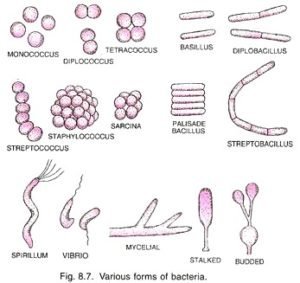 General structure of a bacteria 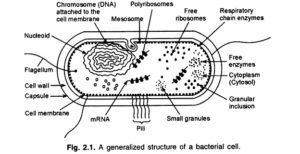 Bacteria has a cell wall which is made up of carbohydrate fats and proteins. In plants, the cell wall is made up of cellulose bacteria is enclosed in a slime mold or slime capsule. The cytoplasm is alkaline in nature and it contains substances such as sugar, fat, proteins and most of these are colorless. Some bacteria have flagella for locomotion while others do not have.

Reproduction in bacteria is asexual by binary fission (the nucleus divides, the cytoplasm divides and two new organisms are formed.

Bacteria respire either aerobically or anaerobically

Bacteria occurs in soil, dust, water, air, food, bodies of plants and animals and everywhere. Some can live in hot springs up to 60oc

Bacteria grows and multiply very rapidly at temperatures between 30oc and 37oc. when the bacteria reach full maximum size of growth it produces by an asexual method call binary fusion (the nucleus divides, the cytoplasm divides and two new bacteria are formed). This division occurs every 20 – 30 minutes.

4.9. Growth and multiplication of bacteria

When bacteria reach full seize of growth, it can multiply by binary fission. The growth is determined by the population of bacteria cell and the bacteria can multiply to form a colony of cell.

The growth rate of bacteria is favored by temperature between 30 degree to 37 degree up to a maximum of 42 degree. The growth rate is affected by the presence or absence of nutrients and also the accumulation of waste nutrients needed four phases. 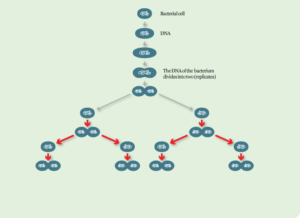