LESSON 14: THE THEORIES OF THE EARTH STRUCTURES

This theory describes the tearing and movement of continents apart. It was brought up by ALFRED WEGENER in 1915. The main ideas are

Fig: The pattern of continent setting

Earth scientists have found proofs that our continents have been moving and are still moving;

The same applies to fissile fuels 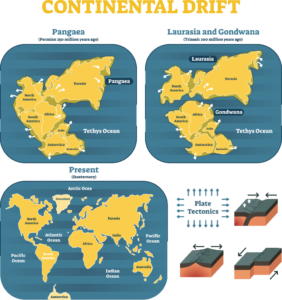