Limestone is a sedimentary rock of organic origin derived on the accumulation of coral and shell in the sea. It is made up of calcium carbonate.

Lesson 22:      RUNNING WATER (ACTION OF WATER ON THE LANDSCAPE)

The long profile of a river

There are three stages involved in the river course. I.e.

At this stage, the gradient is steep and vertical erosion is dominant, small volumes of water. The land forms produced here are mainly erosional.

It is caused by vertical corrosion on the valley floor. THE VALLEY size is widened by both weathering and mass movement to produce a goerge.

It is characterised by vertical and lateral erosion, gentle sloping slopes larger volume of water.

On the concave bend where erosion is dominant, a river cliff is produced while on the convex bend, slip off slopes is produced. 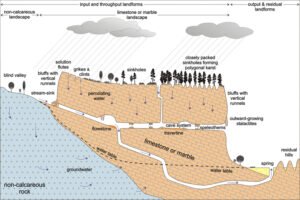