Symbolising the A, E, I and O propositions

According to John Venn, circles can be used to represent classes and propositions. A class can be represented by a circle labelled with the term which designates the class. Thus, the class “S” can be diagrammed as follows:

And the class P can be diagrammed as

To assert that the class S is empty, we shade the entire interior of the circle representing S

But to assert that the class S IS NOT empty, we write an x in the middle of the circle

To diagram a standard form categorical proposition, two intersecting circles are needed, one for the subject and the other one for the predicate term 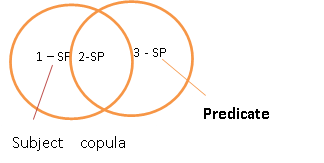 So, any proposition of the form “some S are P” is asserting that there is something which is member of both of “S” and “p”

I proposition: Some S are P, symbolised as SP≠0

For any proposition that has the form “Some S are not P”, there is an assertion that there is something in “S” that is not a member of “P”. It is diagrammed as follows

O proposition: Some S are P, symbolised as SPˉ≠0