It is the process were solid, gaseous and liquid materials are ejected on to the earth surface

A volcano is a mountain with an opening or hole called VENT which enables the out flow of materials from beneath onto the earth surface. Magma is stored in reservoirs called MAGMA CHAMBER

These features are formed when magma cools and solidify with in the earth crust they include sill, dyke, laccolith, phacolith and batholith, lapolith

These are features formed when magma reaches the surface as lava, and then cools and solidifies. Extrusive volcanic features include Ash and Cinder cones, Lava cones, composite volcanic cones, and Caldera and lava plateau

These are symmetrical cones consisting of fragmentary materials. The height of ash and cinder cones is usually less than 300meters. It has steep, concaves sides with large craters on their summit. They result from violent volcanic eruptions during which lava is blown high into the air. The lava cools and solidifies into tiny fragments, which fall back to the surface around the vent accumulating to form ash and cinder cone. E.G Paricutin in Mexico

These are cones formed when larva flow and build up volcanic. Two types exist

These are cones with gentle stops and broad base having a wide shallow craters and their sormith. They are formed when highly fluid lava is emitted on to the earth surface which spread over a long distance before cooling

These are steep sided and narrow based lava cones. They are formed when highly vicious lava flowing only for a short distance cools and solidify. It is also called Cumulous Domes

The composite cone is also called the strato volcano. It is a large conical, shaped mountain buildup of alternative layers of ash and lava they are formed when several eruption occurs leading to the successive buildup of layers of ash and lava at times secondary cones are formed due to the escape of lava through sides of the cone forming Cone lets

These are large circular depression surrounded by high area of lock with steep side. They are formed when powerful eruption blows off the top of a mountain or when there is subsidence that is the top portion of the mountain collapses into the magma chamber E.G The Eboga and Elergum Calderas 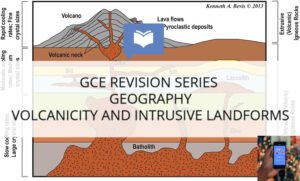