Answer only TWO questions in this section
1 This question concerns bonding, intermolecular forces and energetic,
a) Various forces of attraction are encountered in strongtium and ammonium chloride,
i) Identify the forces present in i)
A: Strongtium B: Ammonium chloride (5 marks)
b) Complete the table below by giving the shapes and bond angles of the species given

C)Ammonia chloride (AlCl3) exist as a dimer Al2cl3 in a gas phase
i) What is a dimer?
ii) Draw the cross and dot diagram of this dimer. (2 marks)
d) The graph below shows the variation in boiling points of the hydrides of Group V elements. 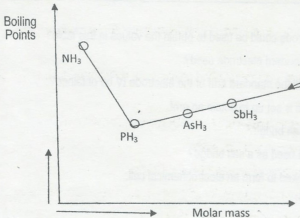 i) Account for the regular increase in boiling points from PH3 toSbH3.
ii) Why is the boiling point of NH3 exceptionally high? . – ( 2 marks)
e) With reference to specific examples, define:
i) Lattice energy
ii) Standard enthalpy of atomization. (4 marks)
f) The standard enthalpy change for the reaction between sodium hydroxide and hydrochloric acid can
be determined experimentally.
i) What is the name given to the enthalpy change in this type of reaction?’
ii) In one such experiment 25cm3 each of solutions of sodium hydroxide and hydrochloric acid of
concentration 1mol dm-3 were mixed. The temperature rose from 27°C to 34.5°C. Calculate the
standard enthalpy change for the reaction in KJmol-1.
(Assume that the specific heat capacity of the solution is 4.2KJkg-1K-1 and no heat is lost to the ‘
calorimeter.) (3 marks)
f) Given the following standard enthalpies.
H2(g) -> 2H(g), DH° =+436KJ
02(g) 20(g), DH° =+498KJ
DH°f(H20) = -285.8KJmol-1
Calculate the 0-H bond enthalpy in water. (2 marks)

(i) A. What standard reference electrode could be used to obtain the values in this table?
B. Under what conditions is the standard electrode used?
(ii) Under what four(4) conditions will the standard emf of the electrode IV be obtained?
(iii) A salt bridge is used when a ceil is set up to obtain an emf.
A. What is the function of a salt bridge?
B. What substance could be used as a salt bridge?
(iv) The electrodes III and IV are linked to form an electrochemical cell.
A. Which species is reduced?
B. Write the equation for the redox process .(8 marks)
(b) A 25.0cm3 sample of 0.1mo!dm-3 solution of ethanoic acid (Ka=1.8X10-3) was titrated with
0.1moldm-3 sodium hydroxide.
i)Calculate the pH of ethanoic acid.
ii)The table below gives the names, and the pH ranges of some acid/base indicators.

Which of the above indicators would you use for the titration in (b) above? Explain.(4 marks)
(c) Rates of reactions are found to increase with temperature.
(i) in the space below, sketch a labeled diagram that shows the distribution of of molecular energies
at two different temperatures.
(ii) State TWO theories that explain the effect of temperature increase on rates of reaction.
(iii) This part concerns a kinetic study on a reaction of your choice.
A. Reaction chosen.
B. State the property (parameter) that could be used for the kinetic study of the reaction.
C. Give the method that will be used to measure the chosen property, and the
instruments/apparatus to be used. (8 marks)
(3) This question is on atomic structure; mole concept and phase equilibrium.
a) The isotopes of bromine have the following abundances 79Br=50.5%, 81Br=49.5%
(i) State one way in which isotopes are similar.
(ii) What instrument is used to detect isotopes in in the laboratory?
(Ill) Calculate the relative atomic mass of bromine from the data. (4 marks)
b) Write the electronic configuration of the element atomic number 12, and sketch a labeled energy level diagram of the electrons .

c) Some miscible liquids show negative deviation from Raoult’s Law and others show positive deviations
i) State Raoult’s law.
ii) Give two experimental evidence for negative deviation from Raoult’s law. (3 marks)
d) An ethanol/water mixture forms an azeotropic mixture.
i)Why is it not possible to obtain a pure sample of ethanol from the mixture by fractional distillation?
ii) How will you obtain pure ethanol from the azeotropic mixture? (3 marks)
e) (i) Draw a well labeled diagram of the experimental set-up (apparatus) that would be used to
determine the molar mass of a volatile substance such as liquid hexane.
(ii) Using the ideal gas equation, derive the expression that could be used to obtain the molar mass of
the liquid.
‘J$Jn one such experiment carried out at a temperature of 470°C and a pressure of 100atmospheres,
4.3g of a volatile liquid produced 30.6cm3 of the gas.
Calculate the molar mass of the gas .(Molar gas constant, R=8.314JK-1 mol1, molar gas volume at
stp=22400cm3,1 atmosphere=1.0X105Nm-2) (7 marks)

SECTION B: INORGANIC CHEMISTRY
{Answer only TWO questions in this section)

4 The first of this question concerns Group VII (The halogens)
(a) (i) Give the colours and the physical state of the elements bromine and iodine.
(ii) From your knowledge of the halogens suggest the colour and physical state of astatine.(3mks)
(b) (i) The iodate/iodide reaction is used in the’ laboratory for iodimetry Complete the equation for the
reaction below.
IO3- + I- + H+ —->
(ii) What indicator is used in the titration of aqueous iodine with aqueous thiosulphate?(2 marks)
(c) What is observed when chlorine water is added separately to solutions of sodium chloride and
sodium bromide? A: sodium chloride B: sodium bromide (2marks)
(d) The hydrides of the halogens dissolve in water forming acidic solutions. Arrange the following
hydrides in order of decreasing strength : HF, HBr, HCI .(1 mark)
(e) State one problem caused by organo-haiogen compounds in society. (1 mark)
This part of the question concerns Group IV elements (carbon to lead)
(f) (i) Write:
A.The general outer shell electronic configuration of the elements.
B . The principal oxidation states of the elements in their chlorides.
(ii) What is the trend in stability of these oxidation states? (4 marks)
.

(g) (i) Using equations only, predict the reaction of silicon tetrachloride and carbon tetrachloride with
water.
SiCl4: CCl4:
(ii) Account for the similarity or difference in their reactions with water, if any. (3 marks)
(h) State the type of bonding in:
(i) Lead(ll) oxide (ii) Carbon dioxide (2 marks)
(iii) state two ways in which carbon differs from the rest of the elements in the group.( 2 marks)
5. This question is on periodicity and s-block elements (Group I and II).
The elements in period 3(sodium to argon) of the Periodic Table shows periodic trends in their
properties.
(a) What is meant by the term periodic strength? (1 mark)
(b) In the space below, sketch a graph of the variation of the variation of the first ionisation energy for –
the elements sodium to argon.(2 marks)
(c) Two oxides of the elements X and y in period 3 have the formulae X2O and YO2. X2O and YO2
are very soluble in water producing solutions whose pH are more than 7 and less than 7
respectively.
(i) ldentify the Groups to Which X and Y belong.
(ii) Write the dot-and-cross diagrams of both oxides.
(iii) Give the formula of one other oxide of either X or Y and give its acid/base property.
(d) (i)ln the table below, give the formulae of the chlorides of the e!ements.( 5 marks)

(ii) How does
he nature of the bonding in the chlorides vary from left to right?
(b) (i) Write the electronic configurations of Na+ and Mg2+.
(ii) How are these ions similar?
(iii) Which of the two ions is bigger? Give a reason. (3 marks)
(c) The atomic radii of Li, Na and, K are respectively 0.157nm, 0.191 and 0.235nm. Give a reason for this trend. (1 mark)
(d) The melting points of Group II elements are generally higher than those of the Group I metals. Give a renson. (1 mark)
The hydroxides of Group I elements are mors soluble Tidn those of Group II elements. Why?(1mk)
(i) Lithium shows a diagonal relationship with magnesium.
(a) Why are the two elements diagonally related?
Give one reaction in which Li and Mg show this relationship.
(d) state and explain the trend in
(i) solubility of Group !l (Group2) sulphates down the croup:
(ii) solubility of group II (Group2) hydroxides up the group.
(iii) thermal stability of Group II (Group?) carbonates. (3 marks’)
(e) What would be observed if excess sodium hydroxide were added drop wise to aqueous solutions of
(i) magnesium chloride (ii) barium chloride (2 marks)
(f) Account for the observation in (f) giving any relevant ionic equations. (2 marks)
6 (a) From the compounds of the Group IV (Group 14) elements (C-Pb), choose an appropriate example
for each of the following:

(b) Lead (IV) oxide reacts with hydrochloric acid according to the equation.^)
Pb02 +4HCI -> PbCI2 +CI2 +2H20
Why is lead(IV) oxide oxidizing hydrochloric acid in this reaction? (1 mark)
(b) (i) Which are the two stable crystalline forms of carbon”
(ii) Which of the forms is a better conductor of electricity? L “‘lain. (3 marks)
(c) Write an equation for the following reactions:
(i) Silicon dioxide reacting with sodium hydroxide
(ii) Lead monoxide reacting with nitric acid. (2 marks)
(d) Which Group IV Group(14) metal forms divalent ions that readily decolorize acidified potassium
manganate(VII)? (1 mark)
(e) Explain why carbon forms a wide range of hydrides while the other Group (IV) (Grcup14)
do so only to a limited extend. (1 mark)
(f) Which of the elements of period 3(Na-Ar) would exist as
(i) diatomic molecule at room temperature?
(ii) monoatomic molecule at room temperature? (2 marks)
(g) Explain the following in terms of structure and bonding.
(i) Sodium oxide (ii)silicon tetrachloride(2 marks)
SECTION C: ORGANIC CHEMISTRY

7 (a) Consider the solid compound A

(i) Draw the structures of the organic product(s) which would be formed when A reacts with:
A: phosphorus pentachloride B: dilute hydrochloric acid C: ethanoyi chloride
D: hot alkaline potassium manganate(VII) E: hot concentrated sulphuric acid.
(ii) What method could be used to obtain a pure sample of compound A from the aqueous solution?
(iii) What test could be used to determine the purity of compound A? (7 marks)
(b)Outline the mechanism for the reaction of propene with HBr. (2 marks)
e)For the reaction sequence
CeH5CH3 step1 C6H5COOH step2 C6H5COCI step3 C6H5CO2CH3
(i) State the reagents in Step 1,2 and 3
(ii) Give an equation the reaction of C6H5COOH with soda lime. What type of reaction is this?
(5 marks)
{d)How would you distinguish by a chemical test the following pairs of compounds?
(i) HCOOCH and CH3COOI-
(ii) CH3COCH3and CH3C02CH3
(iii) CH3CH2NH2 and CH3CONH2 (6 marks)
A a) What information can be obtained about the structural organic compounds from the following physical techniques

(b) An organic compound was found on analysis, to contain 0.355g of chlorine, 0.050g of hydrogen and
0.240g of carbon. The mass spectrum of the compound showed peaks at mass points 15, 28, 29,49, 51
and 64.5 (C=12, Cl= 35.5 H=1)
(i) Determine A: the empirical formula of the compound B: the molar mass of the compound
C: the motecular formula of the compound
(ii) Give the species which could have shown the mass peaks at the points 15,49 and 51.
(iii) Describe how you would chemically test for the presence of chlorine in the compound.
(9marks)
(c) The compound C4H10O is said to exhibit both structural and stereoisomerism. Give two structures
each which are (i) chain isomers (ii) functional group isomers (iii) position isomers (iv) optical
isomers (4 marks)
(d) Give the reagents and reaction conditions for the conversion of CH3CH2CI to:
(i) CH3CH2OH
(ii) CH2CH2 (2 marks)
(e) Outline the mechanism for the conversion of CH3CH2CI to CH3CH2OH (2mk)
9 (a)The following compounds are derivatives of carboxylic acids:.
CH3COCI, CH3CONH2and CH3COCH3
Give an equation to show how each of the following could be obtained from ethanoic acid (CH3COOH)
i) CH3COCI
ii) CH3CONH2
iii) CH3CO2CH3 (3 marks)
(b) Give a chemical test to distinguish between
(i) CH3CCOI and CH3COOH
ii) CH3COOH and CH3CONH2 (4marks)

i) Name the compounds C and D
ii) Complete the table below by giving the type of reaction and reagents/reaction conditions for the conversions in step 1,2 and 3.

(iii) Outline the mechanism for the conversion of C6H6 to C6H5NO2.
(iv) What method would you use to obtain a pure sample of C6H5NH2 from solution?

(v) Give the structure of the compound formed when D reacts with A: CuCN/KCNb