Spirogyra is an alga. It is green in color and the cell has a cellulose cell wall and a definite nucleus. They have chloroplast which is spiral with pyrene on it.

Spirogyra are filamentous green alga which are found in fresh water. It also has a cytoplasmic stand and large vacuole spirogyra carried out asexual production by fragmentation and sexual reproduction by conjugation.

Spirogyra can be found in fresh water such as river ponds, ditches and slow running streams. Some may be found on moist branches or wet branches.

Spirogyra is a green filamentations alga which is slimy to the touches.

Each cell is also covered by a cell wall of cellulose the nucleus is suspended in the middle by a cytoplasm stand. The cell has a large vacuole containing cell sap. The chloroplast is spiral and it contains paranoids.

The spirogyra grows by increase in length but when a filament is cut into pieces, each grows into a new spirogyra filament.

Considering the fat that spirogyra has single cells in the rows, oxygen diffuses into the organism and carbon dioxide diffuses out.

Spirogyra is green because it contains chlorophyll in the presence of carbon dioxide, mineral salt and water with energy coming from sunlight spirogyra can manufacture its own food through the presence of photosynthesis.

Asexual reproduction can go on by fragmentation that is breaking up of filament and after this, binary fission can go on to reproduce a new filament. 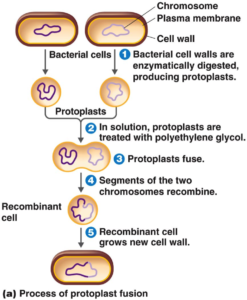