internal structure of the earth

LESSON 12: THE INTERNAL STRUCTURE OF THE EARTH

Evidence from earth quake volcanic eruption, digging into the earth crust has shown that the earth is composed of many circular layers which are divided into 3

Main layers of the earth surface

There are three main layers of the earth namely; THE CRUST, THE CORE, THE MANTLE

Since the sial is lighter than the sima the continents, therefore are said to be floating on the denser sima

It is also called the mesosphere and is about 2900Km thick. The mantle contains very dense rocks rich in olivine mineral (iron and magnesium silicate). Its density is between3 to 5. The temperature at this level is 5000°c hence rocks re in their molten form .The production of magma is done at this layer

It is found beneath the mantle its diameter is 6900Km. It is divided into 2 parts namely THE INNER AND OUTER CORE. The outer core is in the molten state and contain mainly Nickel (Ni) and Iron (Fe). The inner core is in a solid state and consists mainly of Fe. It has a temperature of 5500°c and a density of about 5 to 13

The earth layers are separated by boundaries 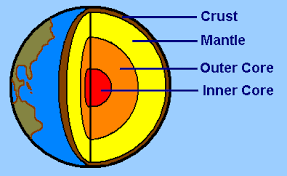