MAJOR PLANETARY ECOSYSTEMS (BIOMES) OF THE WORLD AND THEIR CHARACTERISTICS

It is a large scale of ecosystem stretching across land masses and having similar species of plants and animals which exist under similar climatic conditions.

THE main soil types that develop here is the ferralitic soil. This soil is deep softened and reddish in colour made up mainly of clay minerals.

The major activities here are bush fallowing, plantation agriculture(lumbering and tourism) and hunting.

Problems of the tropical rainforest:

There are two main types of soils (the ferruginous and the tropical black earth).

The ferruginous soil is reddish brown.

The main activities of the people here are agriculture, tourism and light manufacturing.

It is located between latitude 10°-13 north and south of the equator.

Characteristics of the tropical monsoon biome

There are few animals due to scanty vegetation but they have adaptations to live in the desert like the kangaroo rat that live in holes in the day and come out in the night at night when the places are colder. Other animals that live here are foxes, lizards, snakes etc.

Between latitude 30°-45° north and south of the equator.

The main problems here are soil erosion and droughts. 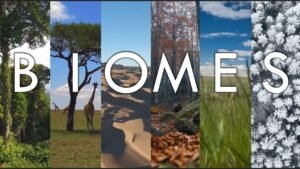