Condensation is he processes by which water vapour upon cooling change it state into liquid or solid state.

Clouds and their classifications

Clouds are masses of condemn water vapour floating in the atmosphere typically high above the ground level.

It is any form of H2O (liquid or solid) formed from the condensation of atmospheric water vapour.

When the sun reaches an area of the earth surface, the near the surface light and rises. When it reaches the condensation level, it expands and cools leading to the formation of clouds. The rain that falls from it is called convectional rainfall 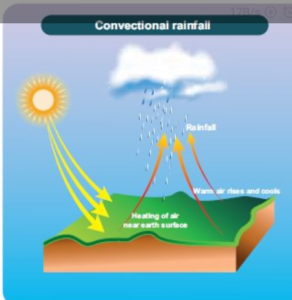 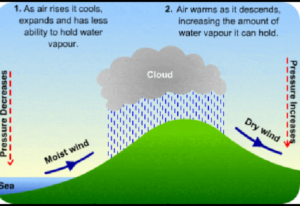 WHEN THE two air masses meet, e.g. Warm light and cold dense air mass, they do not meet due to the difference and hence the formation of a front.

The warm light air mass is forced to ascend, when it reaches the condensation level, clouds are formed which results in rainfall.