A desert is generally a barren area of landscape where little precipitation occurs and consequently living conditions are hostile for plants and animals.

Hot deserts are located between latitude 15°-35° north and south of the equator.

Reasons for occurrence of hot desert

They are formed when rocks masses are made up of alternating hard and soft rocks lay on the path of the winds through the process of abrasion. So winds remove the softer rocks faster than the harder rocks. Since abrasion is greater nearer the surface, the base of the mass rock is more ascarvated living behind a mushroom shaped rock pillars.

They are formed when wind continuously blow off loose materials from desert surfaces leaving behind.

NOTE: in a case where the depression reaches the water table, the deflation stops because it is difficult for wet soil to be transported by wind.

Ventifacts are formed when rock boulders are subjected to abrasion by prolonged wind actions.

Dreikanters are formed when a ventifact is abraded on as many as three sides.

There are two common types:

They are formed when wind meets an obstacle such as a piece of rock boulder. The sand transported by the wind forms heaps on the wind ward side and then slips down on the lee ward side forming sharp edges.

Resources of the hot desert

Challenges of the hot desert 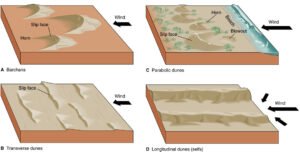